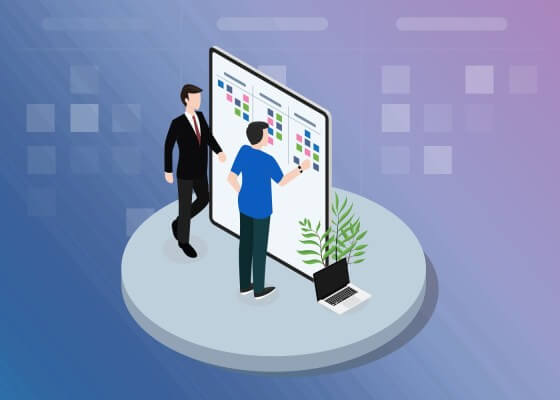 The best practices in the development of cross-functional teams involve having a clearly-defined goal and project objective, having the right combination of individuals as team members to work in a self-directed manner, and have a leader that members can look up to. It also entails ensuring that team members understand the bigger picture to take pride in shared success. Cross-functional teams work best when the communication between team members is crystal-clear, and there is a measuring system in place that measures the progress and enables the team to adapt to changes.

What are T-shaped people? These are people who have an extensive range of skills and proficiencies but have expertise in one skill. Take the case of an individual who has expertise in varied areas but is an Angular development expert. It is a T-shaped person. When you take many such T-shaped individuals and group them together, you make a T-shaped team.

3. Cross-functional teams should have subject-matter experts.

The Cross-functional teams will be successful only when it has domain experts in their own areas of subjects. Thus, while forming cross-functional teams, care should be taken to include subject experts who have the necessary competency and experience to contribute meaningfully to the project.

4. The project goals need to be synced with the organizational goals.

When there is a project, there are individuals and teams involved. There are individual goals, team goals, and the organizational goals. The overall goals of the cross-functional team need to be aligned with the overall goals of the organization. Everyone needs to be working in the same direction. There needs to be clarity between the efforts being put in by individuals and the enterprise goals.

5. Collaboration should be at the back of a cross-functional team.

When teams are formed on a horizontal sphere, for example, two separate groups with UI and AP expertise will work fabulously as separate units. Still, when it comes to integrating their outputs, there could be issues and delays. On the contrary, in vertical teams with cross-functional skill sets, the integration is better driven with enhanced value.

7. Keep assessing the skills of the team members.

As a leader, you should be aware of your team’s proficiencies and competencies. A cross-functional team in Scrum is a superpower, a storehouse of considerable skills. As the team works, it is important to keep auditing the team members’ skills so that you are aware of the reservoir of skills in your team. It helps you be prepared for the future, especially if you know that there is a need for such skills in the coming times. It helps when the leader knows about the interests and who is already skilled helps in better learnings.

It would help if you used the power of automated tools, advancements in technology to ensure that team members are communicating and collaborating optimally. Cross-functional team members are dispersed across different departments. It makes them good at communication, and that too fast and streamlined. One can take advantage of technology, like using effective communication software to make conversations professional and effective.

9. Empower your team with psychological safety.

It is another essential aspect of your team that enterprises need to ensure. Research in 2012 in Google on this topic proved that team members are ready to take risks or have their vulnerabilities exposed when psychologically safe. They also work with more clarity and can meet the par excellence standards of Google’s objectives. Thus, it proved that team members need to have psychological safety to work better and perform more effectively.

10. Empower your team by giving them role-specific training

Some of the benefits that a cross-functional team delivers include covering different PDLC stages in one iteration that helps give the product on-time. Scrum Cross-functional teams can work with increased transparency and collaborative efforts, cultivating a spirit of fairness and equality amongst team members. Besides, decision-making and problem-solving are faster, and overall, productivity much higher. There are distinct advantages of cross-functional teams. Enterprises should encourage the formation of such units. A lot depends on the team because cross-functionality reduces waste related to delays, defects, partial work, paperwork, switching tasks, and hand-offs.

The strategies to build a cross-functional team in Scrum are many. For one, there has to be the right team where everyone takes on an assigned responsibility with eagerness. Second, there needs to be an effective leader who ensures that members collaborate and communicate effectively with one another. Third, there needs to be clearly-defined priorities of the project, and team members need to focus on the project’s overall success rather than their own success.

Oh! We recently winded up one batch, but no worries. We have a few more in the coming weeks.

Just opt-in for the updates about dates, prices, and curriculum with your preferences!

We keep you posted about the course.

©️ 2022 SimpliAxis All Rights Reserved. The certification names are the trademarks of the respective authorised bodies